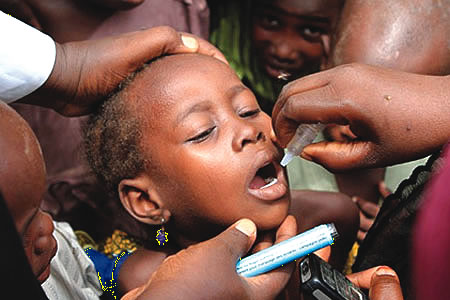 The Lagos State Government in collaboration with Rotary International and the World Health Organisation have begun another round of routine immunisation in rural communities in the state.

According to the state governor, Mr. Akinwunmi Ambode, who spoke at the inauguration of the National Immunisation Plus Plus Days in Ifako-Ijaiye on Friday, about 4.5 million children between 0-59 months would receive free polio vaccine throughout the week.

Ambode who was represented by the Special Adviser on Primary Health Care, Dr. Olufemi Onanuga, stated that vaccinators would be going from house-to-house, markets, churches, mosques and major car parks to vaccinate kids against polio, measles and other infectious diseases.

Onanuga said, “We have mounted 752 fixed posts, 2,189 vaccinators to go from house-to-house and 1,712 transit teams to carry this out. They would be operating 8 am-2 pm daily and the service is free for all.

“We only plead with parents and caregivers to take advantage of the campaign to boost the immunity of their children by patronising designated centres across the state.”