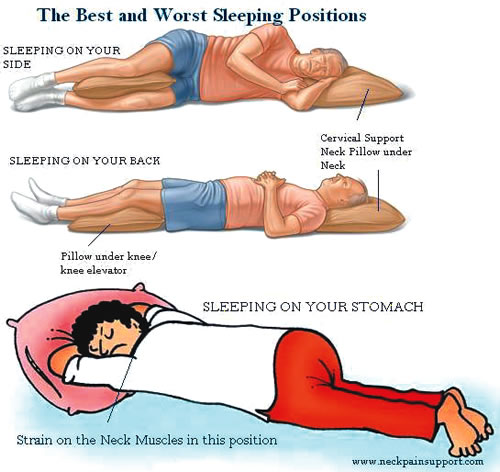 Nothing beats good sleep when the day is done. However, the position you take when sleeping can determine how well you’ll enjoy your sleep.

Sleep is beneficial; and that is why going without sleep for too long can lessen the quality of life. No wonder physicians say sleep plays a critical role in immune function, metabolism, memory, learning, and other vital functions.

Sleep specialist at the Harvard Medical School, Dr. Robert Stickgold, notes that sleep plays an important role in memory, both before and after learning a new task.

He warns that lack of adequate sleep affects mood, motivation, judgment, and perception of events. In order to have a good sleep, we should consider the following…

A consultant obstetrician and gynaecologist at Olabisi Onabanjo University Teaching Hospital, Sagamu, Ogun State, Dr. Olusoji Jagun, says usually, pregnant women are not expected to sleep on their back, especially in their third trimester.

He explains, “When you lie on your back, the weight of the pregnant uterus slows the return of blood to your heart, which reduces blood flow to the foetus. That means the baby is getting less oxygen and fewer nutrients.”

So, the recommended sleeping position for a pregnant woman is sleeping on the left side.

Family doctor, Akin Bajulaiye, says sleeping on your left side is very beneficial for the baby in the womb.

He says, “It may benefit your baby by improving blood flow and, by implication, nutrients, to the placenta. It also helps the pregnant mom’s kidneys to efficiently eliminate waste products and fluids from the body. This confers the advantage of reducing the probability of swelling in the ankles, feet, and hands.”

For infants under one year of age, experts warn against placing a child to sleep in “prone position.”

“By prone position, we mean putting a child to sleep on his stomach,” explains paediatrician, Dr. Abimbola Ogunnusi.

Ogunnusi notes that though causes of Sudden Infant Death Syndrome — an unexpected, sudden death of an infant under one year of age — remains unclear, researches suggest that an infant who sleeps on his or her stomach and whose head becomes covered by bedspreads may begin to overheat.

And though the brain usually triggers the infant to wake up and move to free his or her head, the overheating may inhibit the brain’s protective wake-up signal, resulting in SIDS.

Ogunnusi says that’s why global authorities such as the National Institutes of Health and the American Academy of Paediatrics advise parents to place babies on their backs to sleep.

“This is called back-to-sleep, and it has been known to reduce cases of SIDS by over 50 per cent,” the paediatrician counsels.

For the rest of the population, scientists say the best way to sleep in order to maintain spine health is to sleep on the back, with the arms secured by the sides. “This is good for the spine and the neck,” scientists say.

Again, this position, it is said, prevents facial wrinkles, because nothing is pushing against your face. The only downside here, they warn, is that the sleep position may make you snore more than you are wont to if you took less stringent position.

If you are looking for a way of improving digestion, experts say, you can sleep on your stomach (face down). The only issue you may have to contend with, they warn, is that it can put an enormous strain on the neck, as you may have to face one particular direction.

Author of the book, Sleep Interrupted, Steven Park, advises that side sleeping is also advantageous because it helps keep your airways open.

There are pros and cons to this, though. “Research suggests that sleeping on the left side can relieve heartburn symptoms, while right-side sleeping makes them worse,” Park says.

Experts also note that sleeping on the left side can put a strain on the internal organs such as the liver, lungs, and stomach, even when it minimises acid reflux.

And if you are wondering why you sometimes wake up with back and neck pain, even after you had slept soundly, experts say it may be because you sleep curled up into a ball, with the knees drawn up and your chin tilted down. Called the foetal position, physicians say it can restrict deep breathing.

In conclusion, experts note that it is absolutely impossible to maintain a particular sleep position throughout the night, but that in order to enjoy good quality sleep, you should mind the condition of your mattress. This will often dictate your sleep position.

The bottom line: If you have an old, worn-out mattress that sags in the middle, sleeping may become a nightmare. So, get a new mattress.