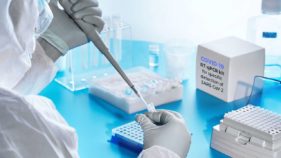 A safe and effective COVID-19 vaccine could be ready by December, according to the promising results of an Oxford University’s experimental jab published yesterday in the medical journal, The Lancet.

The outcomes indicated that the proposed treatment provoked an immune reaction that lasted for at least two months.

The highly anticipated clinical trial revealed that 100 per cent of the volunteers injected produced an immune response against the novel coronavirus.

Pharmaceutical giant, AstraZeneca, is already manufacturing the vaccine, AZD1222, and the United Kingdom government had ordered 100 million doses ahead of time.

According to the study, all participants, who were tested, retained a “neutralising” response – meaning their bodies may be able to prevent COVID-19 – after a month. Immune responses remained strong for a minimum of 56 days.

This means that there were strong signs in their blood that they could fight off the virus if they were to catch it.

Though the therapy had not be licensed for human use, the investigators, however, said it is “possible” that the vaccine could be ready by December if tests keep going according to plan.

Remarkably, nobody suffered any negative side effects, as it stimulated the immune system as hoped.

Some people though developed headaches, tiredness and pain in their arms after given the jab, but scientists claimed that none of them was severe.

The researchers stated: “The early results hold promise, but more is still needed.”

Prof. Sarah Gilbert, one of the scientists leading the project, said: “There is still much work to be done before we can confirm if our vaccine will help manage the COVID-19 pandemic, but these early results hold promise.”

Infectious disease experts warned: “There is still a long way to go before any vaccine is rolled out.”

In a related development, Nigeria, Ethiopia, Democratic Republic of Congo and Tanzania have accounted for over 33 per cent of vaccine-preventable deaths in Africa, but ongoing immunisation could save 702,000 children.

Religion can define your psychology