Home Acne What is the impact of eating too much sugar? 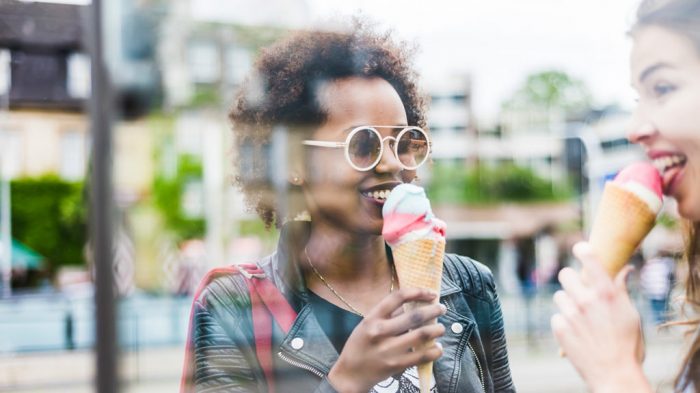 In the short-term, eating too much sugar may contribute to acne, weight gain, and tiredness. In the long-term, too much sugar increases the risk of chronic diseases, such as type 2 diabetes and heart disease.

According to the Centers for Disease Control and Prevention (CDC), people in the United States consume too much added sugar. Added sugars are sugars that manufacturers add to food to sweeten them.

In this article, we look at how much added sugar a person should consume, the symptoms and impact of eating too much sugar, and how someone can reduce their sugar intake.

How much sugar is too much?

According to the Dietary Guidelines for Americans 2010-2015, on average, Americans consume 17 teaspoons (tsp) of added sugar each day. This adds up to 270 calories.

However, the guidelines advise that people limit added sugars to less than 10% of their daily calorie intake. For a daily intake of 2,000 calories, added sugar should account for fewer than 200 calories.

However, in 2015, the World Health Organization (WHO) advised that people eat half this amount, with no more than 5% of their daily calories coming from added sugar. For a diet of 2,000 calories per day, this would amount to 100 calories, or 6 tsp, at the most.

Symptoms of eating too much sugar

Some people experience the following symptoms after consuming sugar:

Risks of eating too much sugar

Consuming too much sugar can also contribute to long-term health problems.

Sugar feeds bacteria that live in the mouth. When bacteria digest the sugar, they create acid as a waste product. This acid can erode tooth enamel, leading to holes or cavities in the teeth.

People who frequently eat sugary foods, particularly in between mealtimes as snacks or in sweetened drinks, are more likely to develop tooth decay, according to Action on Sugar, part of the Wolfson Institute in Preventive Medicine in the United Kingdom.

A 2018 study of university students in China showed that those who drank sweetened drinks seven times per week or more were more likely to develop moderate or severe acne.

Additionally, a 2019 study suggests that lowering sugar consumption may decrease insulin-like growth factors, androgens, and sebum, all of which may contribute to acne.

Sugar can affect the hormones in the body that control a person’s weight. The hormone leptin tells the brain a person has had enough to eat. However, according to a 2008 animal study, a diet high in sugar may cause leptin resistance.

This may mean, that over time, a high sugar diet prevents the brain from knowing when a person has eaten enough. However, researchers have yet to test this in humans.

A 2013 article in PLOS ONE, indicated that high sugar levels in the diet might cause type 2 diabetes over time.

The National Institute of Diabetes and Digestive and Kidney Diseases (NIDDK) add that other risk factors, such as obesity and insulin resistance, can also lead to type 2 diabetes.

In a 2011 study, researchers found a link between sugar-sweetened beverages and high blood pressure, or hypertension. A review in Pharmacological Research states that hypertension is a risk factor for CVD. This may mean that sugar exacerbates both conditions.

Excess sugar consumption can cause inflammation, oxidative stress, and obesity. These factors influence a person’s risk of developing cancer.

A review of studies in the Annual Review of Nutrition found a 23–200% increased cancer risk with sugary drink consumption. Another study found a 59% increased risk of some cancers in people who consumed sugary drinks and carried weight around their abdomen.

Excess sugar in the diet leads to the formation of advanced glycation end products (AGEs), which play a role in diabetes. However, they also affect collagen formation in the skin.

According to Skin Therapy Letter, there is some evidence to suggest that a high number of AGEs may lead to faster visible aging. However, scientists need to study this in humans more thoroughly to understand the impact of sugar in the aging process.

How to eat less sugar

A person can reduce the amount of added sugar they eat by:

Added sugar and sweeteners come in many forms. Ingredients to look out for on a food label include:

Some of these ingredients are natural sources of sugar and are not harmful in small amounts. However, when manufacturers add them to food products, a person might easily consume too much sugar without realizing it.

Some food products contain large amounts of added sugars. Reducing or removing these foods is an efficient way to reduce the amount of sugar a person eats.

The Dietary Guidelines for Americans 2010–2015 state that soda and other soft drinks account for around half a person’s added sugar intake in the U.S. The average can of soda or fruit punch provides 10 tsp of sugar.

Another common source of sugar is breakfast cereal. According to EWG, many popular cereals contain over 60% sugar by weight, with some store brands containing over 80% sugar. This is especially true of cereals marketed towards children.

Swapping these foods for unsweetened alternatives will help a person lower their sugar intake, for example:

Manufacturers often add sugars to foods to make them more appealing. Often, this means people do not realize how much sugar a food contains.

By avoiding processed foods, a person can get a better sense of what their food contains. Cooking whole foods at home also means someone can control what ingredients they put into their meals.

People should see their doctor if they experience the symptoms of high blood sugar. According to the NIDDK, symptoms include:

These symptoms may indicate a person has diabetes. A doctor can test for diabetes by taking a urine sample.

People should also speak to a doctor if they experience other symptoms after eating sugar, such as bloating.

Consuming too much added sugar has many adverse impacts on health, including tiredness and weight gain, and more severe conditions, such as heart disease. Added sugars are present in many processed foods and drinks.

People can reduce their sugar intake by knowing what to look for on food labels, avoiding or reducing common sources of sugar, such as soda and cereals, and prioritizing unprocessed whole foods.

If a person is concerned about weight gain, symptoms that may indicate diabetes, or other symptoms they experience after eating sugar, they should speak to a doctor.

The Benefits Of Drinking Herbal Teas

5 Amazing Things Coconut Oil Does for Your Skin

How do you get rid of a butt rash?