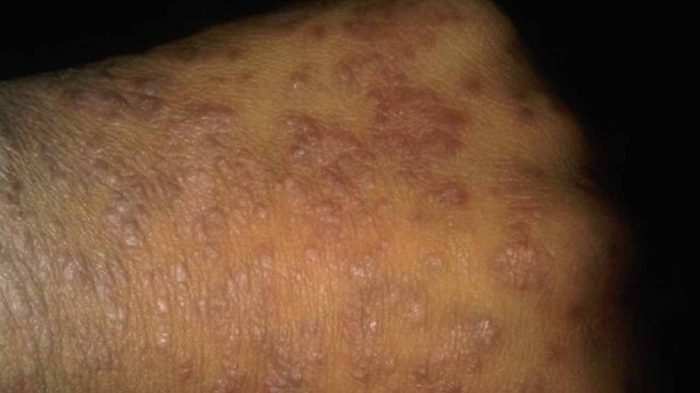 PSORIASIS is a chronic autoimmune skin disease that speeds up the growth cycle of skin cells.

What are the symptoms of psoriasis?
Psoriasis causes patches of thick red skin and silvery scales. Patches are typically found on the elbows, knees, scalp, lower back, face, palms, and soles of feet, but can affect other places (fingernails, toenails, and mouth). The most common type of psoriasis is called plaque psoriasis.

Who is at risk for psoriasis?
Anyone can get psoriasis. It occurs mostly in adults, but children can also get it. Men and women seem to have equal risk.

What causes psoriasis?
Psoriasis is an autoimmune disease, meaning that part of the body’s own immune system becomes overactive and attacks normal tissues in the body.

How is psoriasis diagnosed and treated?
Psoriasis often has a typical appearance that a primary care doctor can recognize, but it can be confused with other skin diseases (like eczema), so a dermatologist (skin doctor) is often the best doctor to diagnose it. The treatment of psoriasis usually depends on how much skin is affected, how bad the disease is (example, having many or painful skin patches), or the location (especially the face). Treatments range from creams and ointments applied to the affected areas to ultraviolet light therapy to drugs (such as methotrexate). Many people who have psoriasis also have serious health conditions such as diabetes, heart disease, and depression.