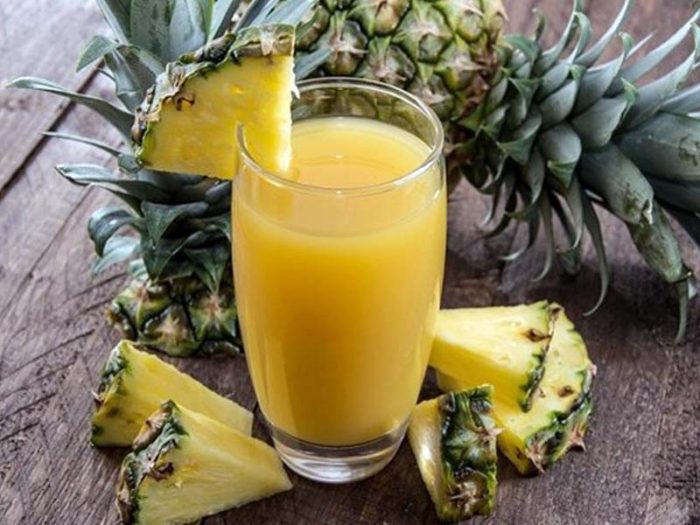 Pineapple, a delicious tropical fruit, has been celebrated for centuries not only for its unique taste but also for its miraculous health benefits. The health and medicinal benefits of pineapple include improving the immune system, respiratory health and digestion, strengthening bones, reducing inflammation, curing coughs and colds, and weight loss.

Aside from the interesting story and appearance of this fruit, it is also a storehouse of huge health benefits due to its wealth of nutrients, vitamins, and minerals, including potassium, copper, manganese, calcium, magnesium, vitamin C, beta carotene,  thiamin, B6, and folate, as well as soluble and insoluble fiber, and bromelain.

A pineapple fruit is known to offer a lot of benefits, which include a stronger immune system, weight loss, improved respiratory health and strengthened bones, among others. Let us discuss each benefit in detail;

One of the most celebrated uses of pineapple in terms of health is its ability to reduce the inflammation of joints and muscles, particularly those associated with arthritis, a debilitating disease that affects millions of people around the world. Pineapples contain a relatively rare proteolytic enzyme called bromelain, which is primarily associated with breaking down complex proteins and has serious anti-inflammatory effects. Bromelain is also positively correlated with reducing the signs and symptoms of arthritis in many.

A single serving of pineapple has more than 130 percent of the daily requirement of vitamin C for human beings, making it one of the richest and most delicious sources of ascorbic acid. Vitamin C helps in reducing illnesses and boosting the immune system by stimulating the activity of white blood cells and acting as an antioxidant to defend against the harmful effects of free radicals. Free radicals are dangerous by products of cellular metabolism that can damage various organ systems and disrupt function, as well as cause healthy cells to mutate into cancerous ones. The vitamin C content of pineapples defends against this.

One of the commonly overlooked benefits of vitamin C is its essential role in creating collagen. This is partly the reason why it is seen as a healing vitamin because collagen is the essential protein base of blood vessel walls, skin, organs, and bones. High vitamin C content in pineapple helps you heal wounds and injuries quickly, along with defending your body against infections and illnesses.

Pineapple has been directly related to preventing cancers of the mouth, throat, and breast, as it is rich in various other antioxidants, including vitamin A, beta carotene, bromelain, various flavonoid compounds, and high levels of manganese. Manganese is an important cofactor of superoxide dismutase, an extremely potent free radical scavenger that has been associated with a number of different cancers.

The normal immune system boosting power of vitamin C is well known, but that special enzyme, bromelain, is also connected with the reduction of phlegm and mucus build up in the respiratory tracts and sinus cavities. Pineapples, rich in bromelain and vitamin C, therefore prevent and treat respiratory illnesses, and eliminate phlegm and mucus from your body if you’ve already contracted an illness or infection.

Vision is one of the most important senses for human beings and pineapples have been directly connected to improving eye health and preventing the age-related eye deficiencies that often occur. Macular degeneration affects many elderly people, and beta carotene can help delay this vision problem. Keeping proper amounts of beta-carotene in your diet from fruits and vegetables is essential in maintaining good eyesight as you age. 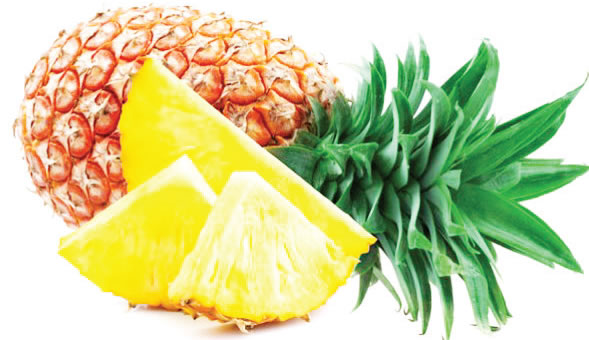 Pineapples are some of the most popular tropical fruits in the world. They are sweet, juicy, and delicious. More importantly, they are very healthy and nutritious. It is no wonder many people who want to have a healthy lifestyle include these fruits in their diets. To know more about them, here are some of the many health benefits of eating pineapples.

Packed with vitamins and minerals

Pineapples are loaded with vitamins and minerals including vitamin A, vitamin C, calcium, phosphorus, and potassium. It is also rich in fibre and calories. On top of it all, this fruit is low in fat and cholesterol. All the nutrients it contains promote good health.

Since pineapples are rich in vitamin C, it can fight off viruses that cause cough and colds. Even when you are already infected with such ailment, pineapples can help you. These fruits have bromelain, which is effective in suppressing coughs and loosening mucus. Eating pineapples while taking the right medications prescribed by the doctor for your sickness can help you recover more quickly.

Pineapples are also popular for their ability to build and maintain strong bones. This is because these fruits contain manganese, which is a trace mineral that your body needs to build bones and connective tissues. In fact, if you consume a cup of pineapple, you can already get 73 per cent of your total body requirement for manganese.

People are always very concerned with their teeth that they sometimes fail to give importance to the gums, which are equally essential since they hold the teeth in place. If a person has unhealthy gums, his/her teeth would be in bad condition, and eventually will fall out. Eating pineapple will strengthen your gums that will help keep your teeth healthy and strong.

Pineapples are known to prevent different kinds of ailments. One example is macular degeneration. This disease, which is the primary cause of vision loss in adults, is caused by damage to the retina. Reading, recognising faces, and doing daily activities can become a lot more difficult because of this problem. Including pineapple in your diet can lower risk of this disease by as much as 36 per cent. This is because this fruit contains beta carotene that is good for our sense of sight.

Since these fruits have anti-inflammatory qualities, eating pineapples can greatly alleviate the pain of arthritis while at the same time improve the condition by strengthening the bones. Apart from arthritis, it can also improve other similar conditions like carpal tunnel syndrome and gout.

Bromelain found in pineapples work to neutralize fluids to ensure that they are not too acidic. It also helps regulate the secretions in the pancreas to aid in digestion. Apart from that, since bromelain has protein-digesting properties, it can keep the digestive track healthy.

The way people cough all over the place seems to suggest that many don’t see it as an ailment that is serious enough to warrant hospital visit.

It’s even worse among adults as they cough repeatedly, clearing their throats all the time, spitting indiscriminately and generally being obnoxious.

In school, kids are known to regularly return home with serious infections from classmates whose parents have neglected to treat their cough.

Yet, physicians are warning that even though coughing is sometimes the body’s way of cleaning up itself, in some cases, it could be a harbinger of other health issues, hence the need to attend to it when a cough refuses to subside in two weeks.

A General Practitioner, Dr. Olatunde Shipeolu, says in general, coughs are usually caused by infections such as common cold, affecting the throat and the windpipe.

He says that pneumonia can also lead to a coughing spree, especially in cases of infections of the lungs.

“A long time condition such as asthma can also lead to coughing, just as an allergic condition like hay fever can make anyone develop cough,” Shipeolu says.

He adds that when a person inhales too much dust or smoke, s/he may develop cough until the airways are rid of the infectious agents.

And for the smoker, cough is a regular and constant companion. Shipeolu says for an individual who smokes, a cough can be an indication that the smoker has developed chronic obstructive pulmonary disease.

Another physician, Dr. Oghenekaro Iriogbe, says cough can be dry, chesty or whoopy.

A paediatrician, Dr. Laolu Falade, warns that in children, a cough can be an indication that a child has cystic fibrosis.

“This is a genetic condition that makes the lungs and digestive system to become clogged with mucus, with attendant symptoms such as persistent cough, recurring chest and lung infections, and poor weight gain, among others,” Falade says.

He adds that in certain scenarios, constant coughs might also be an indication that a child is infested with worms and therefore needs to be dewormed under the guidance of a competent physician.

“The trouble with children’s cough from worm infestation is that it is very possible for a single child who is infected this way to infect an entire class of children! That is why parents should not neglect to treat any coughing child, knowing that other children are at risk of catching the infection,” the paediatrician says.

The doctors warn that another reason why one may not ignore a cough that refuses to subside in two or three weeks is because the condition may be due to the presence of diseases in the chest cavity.

“Certain diseases in the chest cavity may also cause a chronic cough. These include cancer, unusual growth of a lymph node or if an individual develops an abnormal enlargement of the main blood vessel in the heart.

“The longer the coughing person stays away from accessing care, the more complicated the treatment is likely to become. We counsel people to take coughs seriously once it’s getting to unbearable levels,” Iriogbe says.

They also warn that such coughs are usually accompanied by copious sputum or phlegm, indicating that an infection is present.

Shipeolu notes that in most cases, coughs get nastier at nights, keeping you and everyone around you awake for the better part of the night; and leaving everyone grouchy in the morning!

He says coughs get worse at nights because the throat is predisposed to gathering mucus as an individual lies down to go to sleep.

“This makes it hard for the body to clear the airways naturally, hence mucus can build up in the throat, sending you into coughing episodes,” Shipeolu explains.

See the doctor if you’ve had a cough for more than three weeks
By the time your cough is particularly severe or is getting worse, it’s time to visit the hospital
Coughing up blood or experiencing shortness of breath, breathing difficulties or chest pain is a serious issue that the doctor must attend to.
If your cough is attended by worrying symptoms such as unexplained weight loss, a persistent change in your voice, or lumps or swellings in your neck, see the doctor!
Depending on the severity, your physician may ask you to undergo certain tests such as a chest X-ray, allergy tests, breathing tests, and an analysis of a sample of your phlegm to check for infection.
A warm shower before bed will help your body to relax, while it will also loosen the mucus and lead to chest decongestion at the same time.
Have some water, clean handkerchief and your cough medicine near your bed. This will soothe you as it tackles the irritation.
Be extra-hygienic by washing your bedding once every week with warm water.
Sip water all the time. It will lubricate your throat and reduce the irritation in the throat.
While your cough lasts, sleep on your side, and not on your back.
Follow me on twitter: @bayoolupohunda