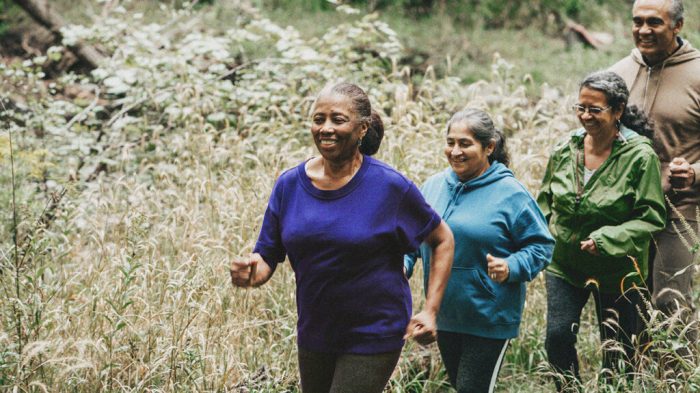 For people spending more time at home as a result of the COVID-19 pandemic, the new research provides an impetus to go for more walks and avoid sitting too long in front of computer or television screens.

In the two studies, which the University at Buffalo (UB), NY, led, researchers found that postmenopausal females who went for brisk walks and spent less time sitting or lying down during their waking hours had a lower risk of hypertension and heart failure, respectively.

“Walking and moving are simple activities that can be easily integrated into our daily lives,” says Jean Wactawksi-Wende, Ph.D., dean of UB’s School of Public Health and Health Professions (SPHHP) and a co-author of both studies.

The research drew upon data collected over several years from females who took part in the Women’s Health Initiative. The participants were 50–79 years of age at the start of the studies.

The results suggest that regardless of overall levels of physical activity, walking more and being less sedentary can benefit cardiovascular health.

The walking research followed 83,435 females who did not have a diagnosis of hypertension, heart failure, coronary heart disease, or stroke at the start of the study.

All of the participants reported that they could walk at least one block without assistance.

During the average follow-up period of 11 years, 38,230 participants received a diagnosis of hypertension.

After adjusting for other possible contributing factors, including other types of physical exercise, the participants who walked the most were 11% less likely to develop hypertension than those who walked the least.

Participants who were among the fastest walkers had a 21% lower risk of hypertension compared with those who walked the slowest.

Even after adjusting the figures to account for the overall amount of time that each participant spent walking and the distance they covered, a walking speed of at least 2 miles per hour was associated with a significant reduction in the risk of hypertension.

The study suggests that walking briskly has a more significant effect on hypertension risk than either the total distance or the duration of walks.

“To put it simply, get your steps in, and try to make them quick,” says Connor Miller, who was the lead researcher on the study, which he worked on while obtaining his master’s in epidemiology at UB. He is now an epidemiologist at Roswell Park Comprehensive Cancer Center in Buffalo.

“Our work adds to growing evidence that you don’t necessarily have to be an avid jogger or cyclist to gain health benefits from physical activity,” he adds.

The findings of this study appear in the journal Hypertension.

The study of sedentary behavior followed 80,982 females who had not received a diagnosis of heart failure at the start of the study and were able to walk at least one block unassisted.

The participants regularly filled out questionnaires that included questions about the amount of time they spent sitting or lying down in their waking hours.

During the average follow-up period of 9 years, there were 1,402 cases of hospitalization for heart failure.

In their analysis, the researchers adjusted the figures to account for a wide range of other possible confounding factors, including the participants’ age, race/ethnicity, smoking status, alcohol consumption, and use of hormone replacement therapy.

Sitting for more than 8.5 hours per day was associated with a 54% increased risk of heart failure.

Even among females with the highest levels of recreational physical activity, the risk of heart failure was significantly raised if they spent more than 9.5 hours per day sitting or lying down.

“This latter finding points to the need to not only promote more physical activity for heart failure prevention but to also promote interruption of sedentary time throughout the day,” says LaMonte.

In their paper, the researchers say that the risks of heart failure associated with prolonged sedentary behavior are on a par with those for obesity and diabetes.

Other studies suggest that sedentary behavior promotes the development of atherosclerosis (narrowing of the arteries supplying the heart muscle), the authors write, which, in turn, increases a person’s risk of heart failure.

They report their findings in the journal Circulation: Heart Failure.

Medical News Today have reported a range of other possible negative health effects of sedentary behavior, including obesity, type 2 diabetes, and cancer.

Limitations of the research

Both studies had some limitations in common.

The researchers could not rule out the possibility that some participants had undiagnosed underlying health conditions at the start of the study. These could have affected their walking and sedentary behavior.

Also, both studies relied upon the participants’ estimates of how far and fast they walked or the amount of time they spent sitting or lying down.