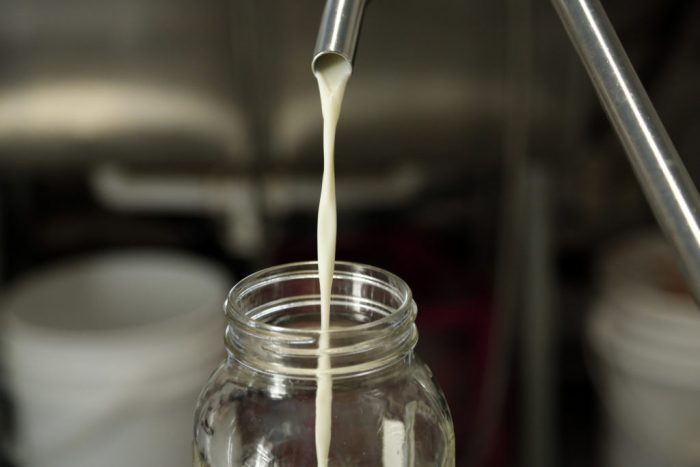 Analysis of raw milk samples bought in the United States found small numbers of beneficial bacteria alongside potentially dangerous antibiotic-resistant bacteria, which increased in number when left at room temperature.

Typically, manufacturers pasteurize, or heat, milk to kill any bacteria before people consume it. The French microbiologist Louis Pasteur developed pasteurization in the 1800s.

However, in recent years, many people have begun to favor raw, or unpasteurized, milk. Proponents believe that raw milk has enhanced nutritional value, benefits digestion, and strengthens the immune system.

However, scientists and doctors have questioned the credibility of these claims and warned about the potential risk of infection from drinking raw milk.

The U.S. Food and Drug Administration (FDA) also dispels the false health benefits of raw milk consumption. According to the Centers for Disease Control and Prevention (CDC), non-pasteurized milk caused 979 cases of illness between 2007 and 2012.

Despite this, raw milk is available to buy in 30 U.S. states, and demand is growing. In a new study, researchers from the University of California, Davis (UC Davis) analyzed the bacterial content of over 2,000 milk samples purchased in the U.S., including raw milk.

They found that raw milk contained higher numbers of bacteria compared with pasteurized varieties. They also identified that some of these bacteria contained antimicrobial-resistant genes.

The findings, published in the journal Microbiome, suggest that raw milk could lead to the spread of antibiotic resistance, particularly if the product is not appropriately chilled.

Good for the gut?

Estimates indicate that about 3% of the U.S. population consumes raw milk. Many of these products claim to contain healthful bacteria that are good for the gut.

To assess these claims, the authors of the latest study collected samples of milk from five states (California, Idaho, Arizona, South Carolina, and Maine).

The samples included a variety of pasteurized milk that manufacturers had sterilized in different ways, including high-temperature-short-time pasteurization (HTST), which is the most common method in the U.S., and ultra-pasteurization (UHT), which provides an extended shelf life.

They stored the samples at the fridge temperature of 4°C and room temperature (23°C) for up to 24 hours. During this time, they analyzed the types of bacteria living within the samples.

A reservoir of antibiotic-resistant bacteria

The results showed that raw milk contained the highest number of bacteria, mostly from the Pseudomonadaceae family, which can cause disease in humans.

The researchers also found that the raw milk samples contained antibiotic-resistant strains of bacteria. When stored at room temperature, the numbers of these bacteria dramatically increased.

“Our study shows that with any temperature abuse in raw milk, whether intentional or not, it can grow these bacteria with antimicrobial resistance genes,” says co-author Michele Jay-Russell, research microbiologist and manager with the UC Davis Western Center for Food Safety.

Antibiotic resistance is one of the biggest threats facing modern medicine. According to the CDC, more than 2.8 million antibiotic-resistant infections occur in the U.S. every year, resulting in over 35,000 deaths.

The consumption of antibiotic-resistant bacteria is a risk not only for the individual but for society as a whole. This is because the genes that confer resistance can transfer between bacteria, leading to the spread of antibiotic resistance.

The researchers say raw milk is “really high risk” if people do not store it correctly. They also warn against consumers trying to make ‘clabber,’ a fermented milk product that involves leaving raw milk at room temperature for 1–5 days. They say that consuming clabber could result in a higher intake of antimicrobial-resistant genes.

“You could just be flooding your gastrointestinal tract with these genes,” says Jay-Russell. “We don’t live in an antibiotic-free world anymore. These genes are everywhere, and we need to do everything we can to stop that flow into our bodies.”

Although scientists need to do more research to understand the health risks posed by raw milk, this study’s findings indicate that it may not be as beneficial as the claims suggest.

The authors recommend that anybody who wants to continue drinking raw milk stores it in a fridge.

“We don’t want to scare people; we want to educate them. If you want to keep drinking raw milk, keep it in your refrigerator to minimize the risk of it developing bacteria with antibiotic-resistant genes.” – Lead author Jinxin Liu

Know the symptoms of colon cancer

The career woman and childbearing delays: A clinical view (1)