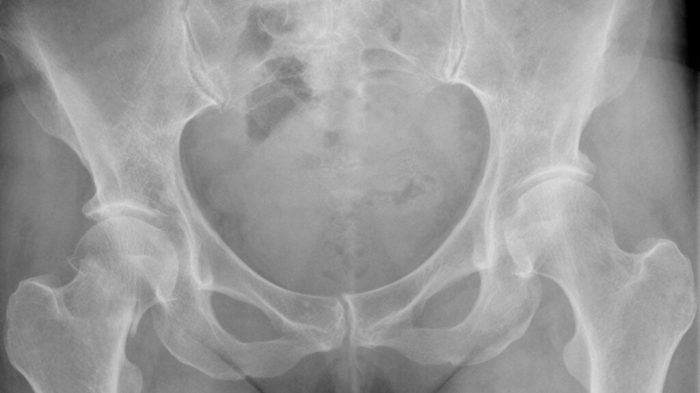 Recent experiments in female rats suggest that the hormone oxytocin can prevent loss of bone density and strength. Further studies could enable the clinical use of oxytocin to prevent osteoporosis.

One of the biggest risk factors for osteoporosis is biological sex. Females are much more likely to experience this condition than males.

After reaching peak bone mass at age 25–30, there is a gradual, age-related decline in bone mass. As a result of changes in the amount of estrogen in the body, in females, this bone loss accelerates after menopause.

During perimenopause, which refers to the years before menopause, the ovaries gradually start to produce less estrogen.

This loss of estrogen affects each female differently, and the impact varies between cultures. Menopause can be a positive experience for some, but it can also induce a raft of changes in the body. These include mood changes, hot flashes, and night sweats, as well as a loss of bone density.

Extensive loss of bone density, which leads to an increased risk of breaking a bone, is called osteoporosis. In the United States, nearly 25% of females over the age of 65 have osteoporosis. In males of the same age, this figure is 5%. Globally, the rates of osteoporosis vary by up to 10-fold between ethnic groups.

Aside from making certain lifestyle changes, there is currently no effective way to prevent osteoporosis. However, scientists in Brazil think that they may have found one.

In experiments in female rats, the scientists used the hormone oxytocin to reverse processes that reduce the density and strength of bone. If studies in humans produce similar results, doctors could eventually use oxytocin clinically to prevent the onset of osteoporosis.

The findings appear in full in the journal Scientific Reports.

Researchers at São Paulo State University in Brazil conducted this study. In Brazil, due to the aging population, experts predict that around 100,000 hip fractures now occur each year.

Hip fractures are three to four times more common in females than males, and they can have serious consequences, including loss of mobility and a higher risk of mortality in the years following.

“Loss of function and independence is profound among survivors,” explains senior study author Rita Menegati Dornelles. “Approximately 40% become unable to walk independently, and about two-thirds of these need help a year later. Less than half recover their previous level of function.”

The new study focused on a part of the hip called the femoral neck, which is the most common site for a fracture. The researchers studied this site in 18-month-old female rats, an age that is equivalent to perimenopause in human females.

Dornelles says that research into this phase is critical yet currently underrepresented in the literature.

“There’s a lot of research on the postmenopause phase, which follows a woman’s last period, but hormone swings in perimenopause are already sharp and are associated with a gradual decrease in bone density.”

“More research is needed to support the prevention of osteoporosis during perimenopause, as the period after menopause represents about a third of a woman’s life and should have the best quality possible.”

Dornelles and team treated the perimenopausal rats with oxytocin, a hormone most commonly associated with feelings of affection, bonding, and empathy but which also has important roles in regulating bone mass.

Oxytocin is secreted by bone cells and is associated with bone metabolism in females. Levels of this hormone also decline during menopause.

Around 1 month after the scientists treated the rats, they analyzed blood and tissue samples and compared them with those of animals that did not receive oxytocin.

The rats that received oxytocin showed no loss of bone density and had biochemical markers of bone renewal in their blood.

The bone itself was also more robust in the treated animals. The femoral neck region was stronger and less porous, and it had properties consistent with higher bone density.

These findings are impressive, and they may also be more reliable than those of previous studies. Indeed, older studies have tended to use very young rats that have undergone surgical removal of the ovaries.

However, the animals in this study were undergoing a natural aging process, which may be more relevant to the human experience.

“The animals that received the hormone displayed an increase in biochemical markers associated with bone renewal and in the expression of proteins that support bone formation and mineralization.” – Rita Menegati Dornelles

Although further studies are necessary to assess the safety and efficacy of oxytocin treatment in humans, these results are encouraging. The hormone may be another viable means of preventing osteoporosis in some people.