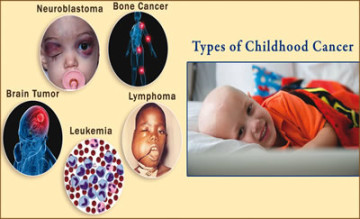 Did you know that children also have cancer? The disease is no respecter of innocent kids or adults.

According to statistics by the International Agency for Cancer Research, United States, in developed countries, cancer is the second leading cause of death in children younger than 15, after accidents.

Unlike in adults, cancer is often detected late in kids, as it may be symptomatic or asymptomatic.

It is also often misdiagnosed because when care givers, health care professionals and parents see its signs and symptoms in these children, they think it is a growth or phase that the children will outgrow.
ADVERTISEMENT

But this is often not the case; nobody outgrows cancer growth. Rather, it should be taken out as soon as it is detected. In fact, experts say that children have a better survival and recovery rate, compared to adults.

Head, Paediatric Oncology Unit of the Lagos University Teaching Hospital, Idi-Araba, Prof . Adebola Akinsuile, says children develop cancer but if detected and treated early, they have 80 per cent chance of surviving it than do adults.

Akinsuile, who spoke at an awareness programme organised by Help to Heal/Kids Fighting Cancer Foundation, in collaboration with Golden Tulip Hotels in Lagos on Thursday, notes that even though it’s curable, many Nigerian children die from cancer due to various challenges.

One of them is late detection and misdiagnosis. According to the paediatric oncologist, many children have died of various cancers because of ignorance on the part of the parents and caregivers such as nurses and doctors.

Akinsuile adds that cancers in children are hard to recognise because its symptoms mimic those of common illnesses such as malaria, bumps and bruises, all of which can mask the early warning signs.

He states, “Cancer in children is not as a result of the lifestyle or environmental risk factors like smoking, pollution and drinking. Instead, it’s usually the result of DNA changes in cells that take place very early in life, even from the womb. This is difficult for many to accept.

“Cancer can happen to anybody, including babies. When its symptoms start, most mothers think it is malaria or measles. It is only when they see the right doctor that they can know that it is cancer,” the expert stresses.

He pleads with parents to stop treating their children personally. Rather, he urges them to take the children to the doctor or specialist any time they notice an usual growth or when the children fall ill frequently.

Akinsuile notes, “It is parents that can help us fight cancer in children because they are the first to see it. They are the ones that will bring the child to the hospital. Children don’t go to see the doctor on their own.

“Don’t be scared to take your child to a doctor if you notice that he/she has an unusual growth in any part of the body. It could be cancerous and we may need to remove it early. Today, up to 70 per cent of all cases of cancer in children can be cured; but you cannot say that for adults. It is not a verdict that your child will die.”

To shed more light on cancer in children and to encourage early detection, experts at the online portal, kidshealth.com, take a closer look at the top five cancers found in children and their warning signs.

Leukemia is a cancer of the bone marrow. It is the most common childhood cancer and accounts for about 34 per cent of all cancers in children. All cases occur between the ages of two and four and this cancer is more common in males than females.

Leukemia starts with bone and joint pain, fatigue, weakness, bleeding, fever and weight loss.  Brain tumours and other nervous system tumours make up about 27 per cent of childhood cancers. Most brain tumours in children start in the lower parts of the brain, such as the cerebellum or brain stem. Although brain tumours are typically different in children as opposed to adults, many of the symptoms remain the same.

It arises from immature nerve cells in infants and young children. Primarily found in children younger than five, this disease often begins in the adrenal glands and makes up seven per cent of childhood cancers in the United States. It’s more common in males than females, and only aboout two per cent of children with this disease have a family history of it.

Impaired ability to walk and changes in eyes (bulging, dark circles, droopy eyelids). Pain in various locations of the body, diarrhoea and high blood pressure are other symptoms.

It starts in the kidneys and is the most common type of paediatric kidney cancer. Usually, Wilms tumour only forms in one kidney, but sometimes in both – only in small cases – and accounts for about five per cent of all paediatric cancers. This disease is typically found in very young children – three to four-year olds – and is not common in children over six. When it happens, about nine out of 10 children are cured.

Swelling or lump in the belly, fever, pain, nausea and poor appetite.

It starts in certain cells of the immune system called lymphocytes. These cancers affect lymph nodes and other lymph tissues such as the tonsils or thymus. They can also affect the bone marrow and other organs, and can cause different symptoms, depending on where the cancer is growing.

If you don’t want to talk about it, Let’s get YOU to know about it!