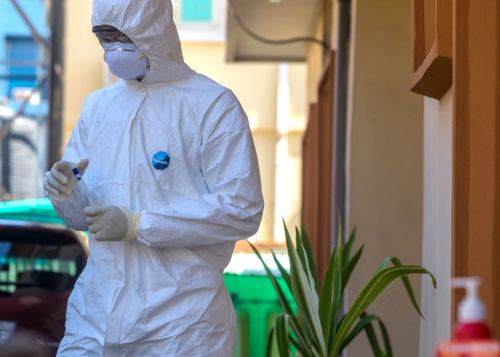 About a week after the National Association of Resident Doctors (NARD) suspended its nationwide strike, another key organ of Nigeria’s health workforce is threatening to down tools.

The Joint Health Sector Unions (JOHESU) said it would be left with no other option but to embark on a nationwide industrial action if the government fails to amend what it described as “gross discrimination” against its members in the implementation of the newly approved inducement and hazard allowances for medical workers.

The association is also protesting among other issues, the alleged withheld salaries of its members.

Hazard pay, a wage supplement paid to workers who do dangerous jobs, has been the grouse of Nigerian health workers since the advent of the coronavirus pandemic.

Health workers, being the first respondents to patients have continued to be at risk of exposure to COVID-19 virus.

Although health workers have been advised to use full Personal Protective Equipment (PPE) before attending to patients, many do not have access to this equipment and as a result, nearly a thousand health workers have tested positive for COVID-19 in Nigeria.

Prior to this, health workers receive N5,000 as hazard pay across board.

Resident doctors, certified doctors undergoing residency to become consultants, were the first to down tools when they did not receive the hazard pay four months into pandemic era.

The doctors also protested unpaid salaries and a dearth of Personal Protective Equipment (PPE) among other demands. Their strike lasted only for a week. It was suspended on June 21 after the federal government said it has released N4.5 billion to 31 federal teaching and medical centres across the country as payment for hazard and inducement allowances for April and May.

Meanwhile, JOHESU, a group of other health workers other than doctors, said they were unfairly treated in the hazard pay arrangement.

In an emergency press briefing Tuesday by the leadership of the association in Abuja, JOHESU national president, Josiah Biobelemoye, said the union did not agree with the arrangement of some of its members receiving 10 per cent while doctors and other high ranking health workers are getting 50 per cent of their basic salaries as the hazard pay.

“We clamoured for hazard a special hazard allowance for this COVID-19 period, we also entered an agreement with government. The paragraph 1A of the agreement is explicit: replace whoever is earning 5,000 with 50 percent of his or her own basic salary.

“Where a health worker is known to be all employed in the health system directly or indirectly to carry out health services for the good of the citizen, today some machinations has been taken place to redefine who a health worker is to say that some persons are no longer health workers and so they should be paid 10 per cent.

“For example, the laundry people who collect all the beddings from the hospitals, isolation and treatment centres of COVID-19 wash these beddings and then you say they are not health workers.

“The word health workers encompass the administrators, accountants and maintenance workers and this was made clear by the Ministry of labour only to be reinterpreted by the federal ministry of health,” the JOHESU president explained.

“Everybody in the health sector is involved in one way or the other that was why paragraph 1A was not stupid to present itself for all. Why are we discriminating in payment now?”

Mr Biobelemoye noted other demands of his union including withheld and unpaid salaries. He said a meeting will be held between the union and the federal government today (Wednesday).

He said if the meeting fails to address their demands, they will down tools.

“We are very procedural we don’t pray for the meeting to fail because the issue is simple and for anybody that lives in Nigeria you may not want it to fail. But where the unthinkable happens, as procedural people, we will give a very short notice within the ambit of the law then we mobilise our people to prepare for a national industrial action”.

In a brief interview with PREMIUM TIMES shortly after the briefing, Ogbonna Chimela, the National Vice President of JOHESU said the hazard pay of 50 per cent across board is fair and balanced.

“The ambulance driver and a consultant does not collect the same basic salary so the 50 per cent as hazard pay across board is balanced,” he said.

Driving without shoes has health hazards