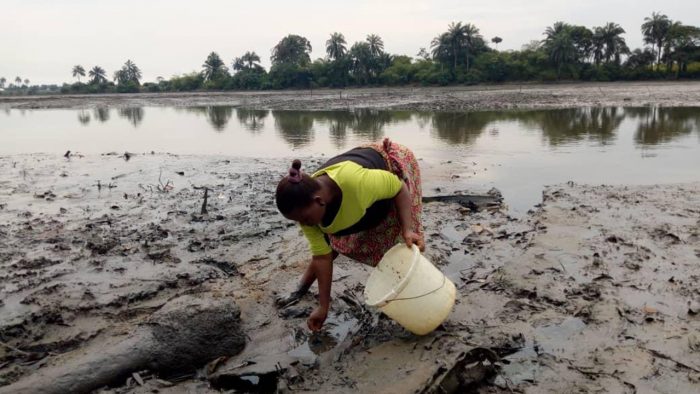 Pollution from five decades of oil operations in Ogoniland in Rivers has deepened the pains and agonies of the Ogonis. Between 1976 to 1991, over 200 million barrels of oil polluted Ogoniland in 2,976 separate oil spills and while oil productions ceased, leakages caused by corroded pipelines and activities of illegal oil bunkerers further plagued the area with massive spills.

Consequently, indicating that residents in the four Local Government Areas of Ogoniland: Eleme, Gokana, Khana and Tai had lived in a contaminated environment for over five decades drinking water and consuming foods from the same source because they had no alternative.

As the World Health Organization (WHO) marks World Lead Poisoning Week, the pathetic condition of Ogoni people comes to mind.

Research shows that living in a contaminated environment, eating food, drinking water, or breathing fumes or dust from it transmits poisons like lead into the body system; this lead poison can unknowingly, to the carrier, penetrate into the blood stream and would be there for years damaging the system and some might settle in the brain, while some can effectively shut down development.

Some signs of lead in the body include: Miscarriages, stillbirth, or premature birth in pregnant women, abdominal pains, high blood pressure, reduced sperm count and abnormal sperm among many others.

An assessment by the United Nations Environment Programme (UNEP), in 2011, revealed that the water in Ogoniland are highly contaminated.

The UNEP report revealed that water sources in Ogoni were contaminated with benzene, a known carcinogen, which was found to be over 800 to 900 times above the limits set by the WHO. The UNEP’s report, however, warned that inhalation of petroleum hydrocarbons and consumption of contaminated food and polluted water would affect people’s health and urged Nigerian government to urgently provide emergency measures like provisions of portable water, health care services among others.

To assuage the pains of the people, in June 2, 2016, Nigerian’s Vice President, Prof. Yemi Osinbajo, on behalf of President Muhammadu Buhari, visited Ogoniland and flagged off the UNEP clean up exercise at Bodo, in Gokana Local Government Area of the State.

The Vice President was visibly emotional at the occasion as the pathetic plights of Ogonis were re-echoed by the several speakers, including traditional rulers, women and youths. He, however, assured that the Nigerian government would intensify actions to fix decades of environmental challenges in the area and as well, implement the emergency measures recommended in the UNEP report.

Months later, the Hydrocarbon Pollution Remediation Project (HYPREP) was established under the Federal Ministry of Environment to achieve the objectives. Sadly, four years after the Osinbajo’s visit and nine years after the release of UNEP report, nothing has changed in the area.x

Findings show that the people still drink, cook with the contaminated water and steadily consume polluted foods and vegetables in the area. The few rich ones buy bags of sachet water from Port Harcourt while some dug boreholes.

Results of a research carried out by Kabetkache Women Development and Resource Centre, where ten women from Eleme were asked to bring water from different boreholes in the area, showed that all the water contained chemicals and unfit for drinking after it was tested in a laboratory.

After much lamentations and criticisms on the inability of HYPREP to provide the emergency measure contained in UNEP report despite confirmations that enough funds has been made available for the project and in addition to The Guardian’s reports titled, ‘How COVID -19 exacerbates Water Challenge in Ogoni land’ published in July 1,this year, two weeks after, precisely, on July 14, 2020, the agency called for bidding for water project in Ogoni where 40 firms opened bids for construction of portable water in the four Local Government Areas in Ogoniland.

According to the Project Coordinator of HYPREP, Marvin Dekil, the water project was to kick start few weeks from the date of bidding, with six slots sited in the four local councils .

Dekil emphasised that it was the mandate of the agency to provide clean and portable water in their catchment area of Ogoni communities.

Sequel to this, Ogoni people heaved sigh of relief with the cheering news. Alas, three months down the line, nothing has been heard about the water project. It has croaked like previous promises and assurances given by the Federal Government on the clean up exercise.

Observations during a visit to Ogoniland and interviews with people revealed a depressed situation occasioned by severe neglect, promise and fail by the Federal government and HYPREP.

The Secretary General, Movement for the Survival of Ogoni People (MOSOP) National Transition Council, Bari-ara Kpalap, said, “HYPREP is just there, they only called for bidding of water project on July 14, 2020, just to douse the agitations and lamentations of the people”

“As we speak, no water is in Ogoniland, the people are still drinking the benzene contaminated water which UNEP came, saw and advised that an alternative source of water be provided. As at today, nobody has said anything about anything in Ogoni, we are just like that.

“The Federal Government on their own has not done anything because HYPREP has been set up and saddled with the responsibility of implementing the recommendations of UNEP.”

Kpalap, however, called on the International communities to prevail on the Nigerian government to provide alternative source of drinking water and implement actions stated in the UN report.

Health experts say, in a typical contaminated environment, it takes one to six months for a small child’s blood lead levels to rise to a level of concern.

Also, the half-life of lead varies from about a month in blood, 1-1.5 months in soft tissue, and about 25-30 years in bone. The body accumulates lead over a lifetime and normally releases it very slowly. Both past and current elevated exposures to lead increases patient risks for adverse health effects from lead, findings show.

A simple blood test can detect lead poisoning and lead level in blood, which are measured in microgrammes per deciliter (mcg/dL).

At Rivers State Zonal Hospital Management Board, Bori, an Out-Patient Register shown to The Guardian by a top management staff who craved anonymity, recorded that out of 15 pregnancies, there are five miscarriages.

At Kpor, Bodo, investigations showed an average of 12 miscarriages are recorded monthly, while death rate stands between 20 to 25 persons in a month.
Speaking with The Guardian, the President of the National Youth Council of Ogoni People (NYCOP), Dr. Young Nkpah, said, “Since HYPREP opened bid for water project, water challenges still persist in Ogoni, the sitation is very bad now following the drastic economic challenge. Before now, some people tried to buy water but because times are hard, people have resorted to using the contaminated water like that.

“They said, we should wash our hands with clean water but we are washing with contaminated water. In Ogoni, today, there are records of high death, genetic diseases, things are becoming so awful yet nobody cares, we have been neglected for many several decades.”

Young however, stressed the need for urgent intervention by the Federal government especially, considering that money has been made available for the clean up project.

The Guardian’s investigation also showed that there are no good and functional health facilities in the area. The few available ones like the Bori General Hospital lack modern days facilities and are also faced with the challenge of shortage of manpower.

Head, Coalition of Ogoni Women, Mrs. Patience Osaroejiji, said, “There are sicknesses and diseases all over the Ogoni communities, no good health facilities are put in place for regular check ups, we are dying.

“Our situation here in the Ogoni region is increasing because of the poverty level in our country Nigeria. We are used to walk to our farms, pluck fresh tomatoes, pepper, vegetables, get our yam or cocoyam, go to the waterside, throw our nets or use small basket and get fish, then go home prepare our meals. But sadly, we do not get these things any more because our land, water, air and ground water have been polluted.”

She therefore called for the enforcement of the emergency measure of the UNEP report.

Also, a traditional ruler in Goi community, Chief Eric Dooli, told The Guardian that the women in his area record over 10 miscarriages in a week as well as high death rate.

A consultant physician and dermatologist at the University of Port Harcourt Teaching Hospital, Dr. Dasetima Altraide, said water contaminated with chemicals can result to serious health challenges including respiratory and renal problems. He therefore advised urgent provisions of portable water in Ogoniland.