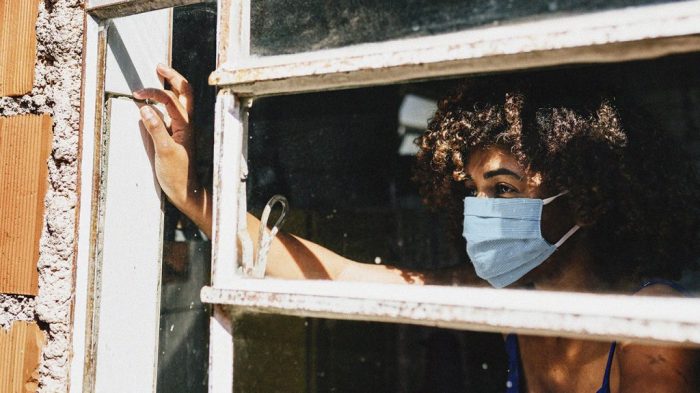 Vitamin D plays a wide range of roles in the body, including regulating calcium levels, maintaining healthy bones and teeth, and supporting the immune system.

In addition to getting vitamin D from dietary sources, the body can make its own in the skin through exposure to sunlight.

However, it can be difficult for people with dark skin and those with low exposure to sunlight to maintain sufficiently high levels of the vitamin, especially during the winter months.

One studyTrusted Source found that, overall, about 42% of people in the United States were deficient in vitamin D. The figure rose to 82% among Black people and 70% among Hispanic people.

Accumulating evidence has shown that people with deficient vitamin D levels are more likely to test positive for SARS-CoV-2, which is the virus that causes COVID-19. They may also be more likely to develop severe disease.

This association may partly explain why the pandemic has disproportionately affected Black, Hispanic, and other non-white populations.

Clinical trialsTrusted Source have found that vitamin D supplements can help protect people against other respiratory infections resulting from viruses.

The research suggests that taking a vitamin D supplement can even reduce viral infections among people who are not deficient in the vitamin, based on the recommended intake in the current guidelines. These recommendations are based on the levels necessary to maintain healthy bones.

Dr. David Meltzer, Ph.D., and his colleagues at the University of Chicago, IL, wondered whether the same could be true of vitamin D and COVID-19.

The researchers analyzed the medical records of 4,638 individuals who had a vitamin D blood test in the 12 months before having a PCR test for SARS-CoV-2 at the University of Chicago Medical Center (UChicago Medicine).

The researchers used the length of time since the vitamin D test and subsequent treatments to estimate the participants’ vitamin D levels 14 days before the PCR test.

In addition, they accounted for factors that are known to increase a person’s risk of COVID-19, such as age, sex, race, and medical conditions.

The researchers discovered that among Black participants, the risk of testing positive was 2.64 times as high for those with a serum vitamin D level of 30–39.9 nanograms per milliliter (ng/ml) — a “sufficient” level — as it was for those with a level of at least 40 ng/ml.

In other words, there appeared to be a significant protective effect from having levels above the range that experts consider to be sufficient.

Among Black participants with a vitamin D level of at least 30 ng/ml, every incremental 1 ng/ml increase in the level of the vitamin led to a 5% decrease in the risk of testing positive for SARS-CoV-2.

“These new results tell us that having vitamin D levels above those normally considered sufficient is associated with decreased risk of testing positive for [SARS-CoV-2], at least in Black individuals,” says Dr. Meltzer, who is chief of hospital medicine at UChicago Medicine and lead author of the study.

“This supports arguments for designing clinical trials that can test whether or not vitamin D may be a viable intervention to lower the risk of the disease, especially in Persons of Color,” he adds.

There were no statistically significant associations between vitamin D levels and the risk of testing positive for SARS-CoV-2 among white individuals.

The researchers attribute this to the relatively low number of positive SARS-CoV-2 tests among white people in their sample.

Similarly, the numbers of participants from other racial groups, including Hispanic people, were too small to yield statistically significant results.

The study appears in the journal JAMA Network OpenTrusted Source.

“These results increase the urgency to consider whether increased sun exposure or vitamin D supplementation could reduce COVID-19 risk,” say the researchers in their paper.

They write that less than 5–10% of adults in the U.S. are likely to have vitamin D levels greater than 40 ng/ml. To attain these levels from taking a supplement — without increased sun exposure — would require more than the currently recommended daily dose.

“Lifeguards, surfers; those are the kinds of folks who tend to have more than sufficient vitamin D levels,” says Dr. Meltzer. “Most folks living in Chicago in the winter are going to have levels that are well below that.”

In the United Kingdom, the National Health Service (NHS) recommends 400 IU (10 mcg) daily. It advises everyone to consider supplementing the vitamin during the fall and winter months but notes that those at high risk of deficiency should do so all year round.

Dr. Meltzer notes that although some studies have found that vitamin D improves immune function and decreases inflammation, the evidence has been mixed.

He believes this may be because researchers have been testing doses that are too low to boost the immune system.

“Based on these results, we think that earlier studies may have given doses that were too low to have much of an effect on the immune system, even if they were sufficient for bone health,” he says.

“It may be that different levels of vitamin D are adequate for different functions,” he adds.

A key limitation of the current study is that while it can demonstrate an association between vitamin D levels and SARS-CoV-2 infection risk, it cannot demonstrate that one causes the other.

To address this problem, researchers from the University of Chicago and Rush University in Chicago, IL, are conducting two clinical studies to learn whether taking a daily vitamin D supplement can help prevent COVID-19 or decrease the severity of its symptoms.

Some of the results of the study were surprising. For instance, Black individuals with a vitamin D level of 20–30 ng/ml were not at an increased risk of COVID-19 compared with those with a level over 40 ng/ml.

Moreover, those with a level below 20 ng/ml seemingly had a lower COVID-19 risk than those with a level of 30–40 ng/ml. The authors suggest that potential variations in vitamin D treatment may explain these discrepancies, but they highlight that ongoing research is necessary in this area.

The authors of the new study also emphasize that social and economic inequities play a role in the increased susceptibility of Black people to COVID-19.

“The significant association of vitamin D levels with COVID-19 risk in Black individuals that was not found in white individuals could reflect their higher COVID-19 risk, to which socioeconomic factors and structural inequities clearly contribute.”

COVID-19: Who is immune without having an infection?

Govt Rolls Out Guidelines for Reopening of Schools