Home Articles Concerns over rising cases of hypertension in ‘children’ 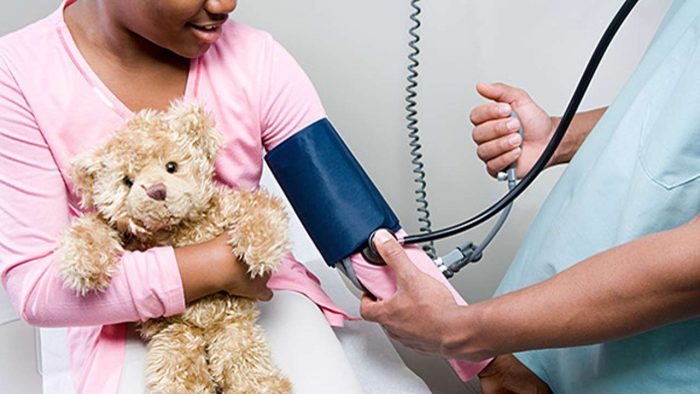 Researchers have raised alarm over rising cases of hypertension among teenagers and adolescents especially those in secondary schools across the nation.

In fact, several studies concluded that the prevalence of hypertension in Nigerian children is high and appears to be increasing and there is need for routine Blood Pressure (BP) and urinalysis check for all children in especially those in clinics and wards.

Indeed, studies suggest a high prevalence of elevated blood pressure among children and adolescents in Africa, with overweight and obesity being an important risk factor. They say efforts to address this burden of elevated blood pressure in children and adolescents should mainly focus on primary prevention at the community level, by promoting healthy lifestyles and avoiding other cardiovascular risk factors, especially overweight and obesity.

According to a study published in the journal The Lancet Public Health and titled “Prevalence of elevated blood pressure in children and adolescents in Africa: a systematic review and meta-analysis”, hypertension in children and adolescents is becoming a major concern, not only because of its rising prevalence, but also because of evidence suggesting that hypertension tracks from childhood to adulthood. Almost half of adults with hypertension had elevated blood pressure values during childhood.x

Furthermore, several studies have suggested that elevated blood pressure in childhood correlates with carotid intima-media thickness, atherosclerosis, left ventricular hypertrophy, and kidney failure in adulthood. Consequently, the study recommended early diagnosis and control of hypertension in childhood are likely to have an important effect on long-term outcomes of hypertension-related cardiovascular complications.

A recent study published in European Journal of Medical and Health Sciences concluded: “There is a noteworthy prevalence of hypertension among adolescent public secondary school students in Nnewi. This was significantly higher among the female gender, lower socioeconomic level and students with minimal physical activity. Waist circumference in the obese/overweight category very likely predicts hypertension.”

According to the researchers, hypertension and associated factors among adolescents have not been given the deserved attention in health care, more so as hypertensive children end up as hypertensive adults with serious co-morbidities. This is even more expedient among public school students, who in our environment are generally of lower socioeconomic status than those in private schools.

The researchers set out to determine the Blood Pressure (BP) profiles and association of obesity indicators, socioeconomic level and physical activity with hypertension among public secondary school students.

The results of the study showed the mean systolic BP increased with age and was higher for girls than for boys.x

Blood pressure is recorded as two numbers: Systolic blood pressure (the first number) – indicates how much pressure your blood is exerting against your artery walls when the heart beats.

Diastolic blood pressure (the second number) – indicates how much pressure your blood is exerting against your artery walls while the heart is resting between beats.

Which number is more important? According to studies, typically, more attention is given to systolic blood pressure (the first number) as a major risk factor for cardiovascular disease for people over 50. In most people, systolic blood pressure rises steadily with age due to the increasing stiffness of large arteries, long-term buildup of plaque and an increased incidence of cardiac and vascular disease.

The abbreviation mm Hg means millimeters of mercury. Mercury was used in the first accurate pressure gauges and is still used in medicine today as the standard unit of measurement for pressure.x

“It is therefore recommended that periodic screening and monitoring of blood pressure of adolescents should be incorporated into the school health programme, while general public health education on hypertension and its associated risk factors should be strengthened.”

The researchers are from University of Nigeria Teaching Hospital (UNTH) Enugu.

According to the researchers, hypertension is a prevalent cardiovascular disease risk factor among blacks and adolescent hypertension can progress into adulthood.

Meanwhile, hypertension has been defined by levels of BP above, which lowering BP will reduce the cardiovascular risk associated with elevated BP and this level has been classically documented at 140/90 mmHg in adults. The new 2017 American College of Cardiology/American Heart Association guideline set hypertension stage 1 at greater than 130/80 mmHg rather than 140/90 mmHg as in the European guidelines.

According to a study titled “Hypertension in children: Could the prevalence be on the increase?” and published in the Nigerian Medical Journal, factors such as age, height, and gender are important factors in interpreting BP values in children. The most widely used definition of hypertension in children is delineated as BP greater than 95 per cent of expected BP for age, gender, and height.

The researchers from the Departments of Paediatrics, College of Medicine, Enugu State University of Technology and College of Medicine, University of Nigeria, Nsukka, Nigeria; and Child Survival Unit, Medical Research Council, Fajara, The Gambia, said unlike in adults where essential hypertension is very common, both secondary and essential (primary) hypertension are seen in children– primary hypertension being influenced by factors such as birth weight, maturity during birth, heredity, and diet while secondary is influenced by renal abnormalities, coarctation of the aorta, medications, neoplasm, etc.

The authors opined that the prevalence of hypertension in children mighy still be on the increase. A higher prevalence value, however, may be expected when other groups of children are considered since BP increases with growth and development and results in hypertension during the first two decades of life. Although the pathogenesis of raised BP in obese children is not widely understood, evidence abounds on other comorbid conditions, which further accentuate the risk of hypertension. Aside from the risks associated with it, childhood hypertension is a major killer and one of the most common health concerns in children worldwide.

There is also substantive evidence linking it with long-term cardiovascular risk in adulthood. Therefore, it is of public health importance.

“Interestingly, identifying children with elevated BP and successfully treating them will have an impact on long-term outcomes of cardiovascular disease as well as a sizeable effect on hypertension-related morbidity and mortality. The cost implication of treating adults with raised BP will be addressed when attention is paid to childhood primary hypertension. To further understand the degree of attention that should be given to hypertension in childhood, knowledge of its prevalence and factors associated with it need to be continuously emphasized. It can also inform the need for routine BP check in children and adolescents in the routine children’s clinic.”

Meanwhile, as part of efforts to curb non communicable diseases including hypertension, the World Health Organisation (WHO) on Tuesday, launched a year-long global campaign for World No Tobacco Day 2021 – “Commit to Quit.” The new WHO Quit Challenge on WhatsApp and publication “More than 100 reasons to quit tobacco” are being released today to mark the start of the campaign.

The COVID-19 pandemic has led to millions of tobacco users saying they want to quit. The campaign will support at least 100 million people as they try to give up tobacco through communities of quitters.

WHO, together with partners, will create and build-up digital communities where people can find the social support they need to quit. The focus will be on high burden countries* where the majority of the world’s tobacco users live.

Quitting tobacco is challenging, especially with the added social and economic stresses that have come as a result of the pandemic. Worldwide around 780 million people say they want to quit, but only 30 per cent of them have access to the tools that can help them do so. Together with partners, WHO will provide people with the tools and resources they need to make a successful quit attempt.

WHO released a scientific brief earlier this year showing that smokers are at higher risk of developing severe disease and death from COVID-19. Tobacco is also a major risk factor for noncommunicable diseases like cardiovascular disease, cancer, respiratory disease and diabetes. Moreover, people living with these conditions are more vulnerable to severe COVID-19.

Both global and regional cessation tools will be rolled out as part of the campaign. WHO’s 24/7 digital health worker to help people quit tobacco is available in English and will soon be released to support people in Arabic, Chinese, French, Russian, and Spanish.

“Millions of people worldwide want to quit tobacco – we must seize this opportunity and invest in services to help them be successful, while we urge everyone to divest from the tobacco industry and their interests,” said Dr. Ruediger Krech, Director of Health Promotion.

To create environments conducive to quitting tobacco, WHO has worked with partners and countries around the globe to implement tobacco control measures that effectively reduce the demand for tobacco.

WHO calls on all governments to ensure their citizens have access to brief advice, toll-free quit lines, mobile and digital cessation services, nicotine replacement therapies and other tools that are proven to help people quit. Strong cessation services improve health, save lives and save money.

Nigeria is one of the 22 campaign focus countries.

WHO ‘strongly’ against hydroxychloroquine use for COVID-19 prevention

Unwanted thoughts are easier to control when rested

Pandemic measures had a strong impact on mental and physical health