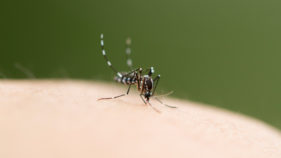 Concerned that malaria may become untreatable and the vector, mosquito, uncontrollable, scientists have alerted on the dramatic increase in resistance of mosquitoes to five mainstream insecticides.

In a step toward better control of mosquitoes that transmit malaria, researchers have mapped the patterns of insecticide resistance in Anopheles gambiae mosquitoes across Africa. The new study, published June 25, 2020 in the open-access journal PLOS Biology by Catherine Moyes and Penelope Hancock of the University of Oxford, United Kingdom (U.K.), and collaborators, found that resistance to five mainstream insecticides increased dramatically between 2005 and 2017.

There are more than 400,000 deaths due to malaria worldwide each year, with more than half of all cases occurring in just six countries in Sub-Saharan Africa. In recent years, progress in reducing the burden of malaria in these areas has resulted from expanded mosquito control programs. However, field studies have suggested an increase in insecticide resistance among the mosquitoes that transmit malaria. This could lead to a decrease in the effectiveness of interventions such as insecticide-treated bednets, which are a mainstay of malaria prevention across the continent.

In the new study, researchers analyzed a published database of information on mosquitoes collected throughout mainland Sub-Saharan Africa between 2005 and 2017. The study looked at 6,423 observations across 1466 different locations. They used the data to map and model when and where insecticide resistance had arisen in populations of Anopheles gambiae mosquitoes.

According to the study, in West Africa, resistance to pyrethroids, the only class of insecticides used in all treated bednets, increased drastically over the timeframe. For instance, 15 per cent of West Africa had mosquitoes with resistance to deltamethrin in 2005, but by 2017 this had risen to 98 per cent. In East Africa, resistance to pyrethroids increased to a lesser degree, expanding from nine per cent to 45 per cent of the region. Similar increases were seen among populations of mosquitoes resistant to DDT, a chemical often used for indoor spraying to kill malaria-transmitting mosquitoes.

Dichlorodiphenyltrichloroethane, commonly known as DDT, is a colorless, tasteless, and almost odorless crystalline chemical compound, an organochlorine. Originally developed as an insecticide, it became infamous for its environmental impacts.

The authors said: “The rapid spread of resistance across large parts of the Sub-Saharan Africa signals an urgent need to quantify the efficacy of different resistance management strategies, and to understand the impact of resistance on malaria transmission and control.

“Relationships between insecticide resistance and malaria prevalence are currently poorly understood, but there is evidence that resistance can reduce the efficacy of standard pyrethroid-treated bednets which have played a key role in achieving reductions in malaria prevalence in Africa over 2000-2015.”

The biorhythms of human

Why suya is healthier with beer