Home News Cholera is killing us! Kadeki residents cry out 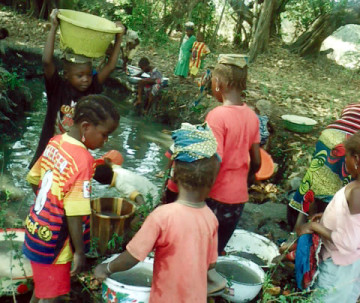 Water, according to the science dictionary, is a colourless, odourless and tasteless liquid that is essential to human survival and existence.

However, the reverse is the case in Kadeki, a community in Panda Local Government Area in Nassarawa State where the residents drink from the same stream as cattle.

The water from the Kadeki stream is reddish in colour. Apart from having a harsh displeasing taste, it gives off an offensive odour.

Residents of Maramara, Angwa, Alura, Chada, Keho, Angwa Tsekiya and Gidan Dio communities in Panda Local Government Area alleged that the polluted water from the stream, which they drink and use for other domestic purposes may have been responsible for the recent cholera outbreak in the area.

According to them, the Kadeki stream is the only source of water in the community that is inhabited by the Gwandara, Fulani, Yeskwa and Mada ethnic groups.

The residents, who are predominantly farmers, said it was high time government came to their aid, as many of them have lost their loved ones to water –related diseases in the last five years.

A resident, Mr. Jatau Madaki, alleged that the polluted water was responsible for the recent cholera outbreak and recurrent cases of infection with diarrhoea that many suffer from in the community.

“So far, we have lost about 60 people as a result of cholera, typhoid and other water- related diseases and government does not seem bothered about our plight.”

Madaki, who is also a youth leader, said though he is used to the effect of the polluted water, he still gets rashes and other infections.

“The state government is not helping matters and each time they come to us, they that they will extend the dividends of democracy to us. Yet, we have not seen any development. We have told them to build boreholes, but none of the politicians or government agencies have done so. Our children cannot continue to drink polluted water,” he said.

Another resident, Mr. John Ayiwulu, blamed Fulani herdsmen and some residents for polluting the stream water.

Ajiwulu told our correspondent that some elders in the village, after discovering that Fulani cattle breeders had polluted the stream, poured some traditional sacrifice into the stream for cleansing.

To ensure that the stream water is potable, Ajiwulu said the community devised a local method of purification.

He said, “We usually wake up as early as 5 am to fetch water from the stream. If we don’t go that early, the Fulani will bring their cattle who will urinate in the stream.

“Sometimes, they insist that their cows drink from the stream before we fetch, we have to comply because we don’t want trouble with them.

“Then we would allow the water to settle. It would still be brown in colour. We would transfer it to another bucket then add alum to disinfect it.”

The residents also lamented that there was no primary health care clinic in the community where the sick could get treated.

Madaki said, “Any time our people fall ill, we have to take them as far as Guduma, another local government area and if the cases are beyond the clinic there, we rush them to the Federal Medical Centre, Keffi which is many kilometres away from Kadeki and in most cases, the patient would have died.”

“It happens regularly and we want government to rescue us this time. We are tired of promises.” He called on the state governor, Umaru Tanko Al-Makura, to deliver on his promises to the community, which is access to potable water.

Another resident, Mr. Musa Audu, told our correspondent that he lost two of his sons during the recent cholera outbreak as a result of the infections they contracted by drinking the polluted stream water.

Audu said, “My sons died of cholera because of the polluted water and I keep praying that I don’t lose any other. Children are forced to drink it because we have no alternative or money to provide an alternative.

“We are tired of their lies and empty promises. We consider a government that does not have its people at heart and does not add value to our wellbeing as a fraud.”

A resident of Angwa Tsekiya community in Kadeki, Mrs. Mary Akulu, said they had been complaining to the state government to come to their aid, but their efforts have yet to yield a positive response from any quarters.

Akulu said, “The state government does not care whether we are human beings or not, all it cares for is to corner state funds that meant for the well-being of the citizens of the state. You can imagine human beings drinking from the same water with Fulani cows.”

Speaking to our correspondent, a chief community health practitioner with Shallom clinic, Jigwada in Keffi local government area of the state, Dr. Danjuma Maidugu Yari attributed the cause of the problem to the level of awareness.

However, our correspondent did not get any response from the state commissioner for health; Dr. Emmanuel Akagbe, in spite of several calls and text messages placed to his mobile numbers as at the time of filing this report.