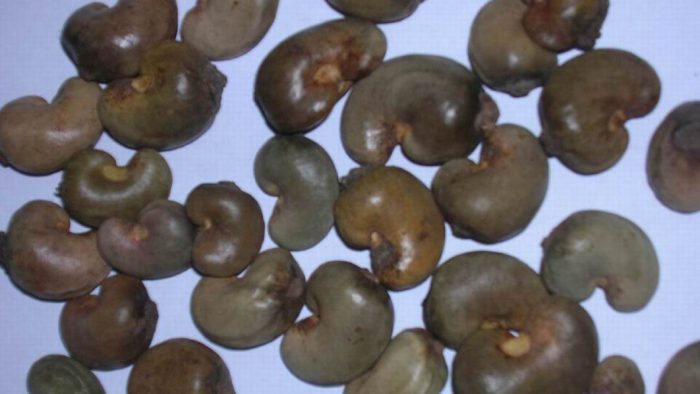 In laboratory experiments, a chemical compound found in the shell of the cashew nut promotes the repair of myelin, a team from Vanderbilt University Medical Center reports Tuesday in the Proceedings of the National Academy of Sciences.

Myelin is a protective sheath surrounding nerves. Damage to this covering — demyelination — is a hallmark of multiple sclerosis and related diseases of the central nervous system.

“We see this as an exciting finding, suggesting a new avenue in the search for therapies to correct the ravages of MS and other demyelinating diseases,” said Dr. Subramaniam Sriram, paper’s senior author, William C. Weaver III Professor of Neurology and chief of the Division of Neuroimmunology.

Previous work led by Sriram showed that a protein called interleukin 33, or IL-33, induced myelin formation. IL-33 is, among other things, an immune response regulator, and multiple sclerosis is an autoimmune disorder.

The cashew shell compound is called anacardic acid. Sriram and team grew interested in it because it is known to inhibit an enzyme involved in gene expression called histone acetyltransferase, or HAT, and the team had discovered that whatever inhibits HAT induces production of IL-33.

The report includes a range of new findings that point to the potential therapeutic use of anacardic acid for demyelinating diseases:
*In vitro, the addition of the compound to rat cells most responsible for myelination — oligodendrocyte precursor cells, or OPCs — spurred induction of IL-33 and rapidly increased the expression of myelin genes and proteins, including dose-dependent increases in myelin basic protein;

*In two animal models of demyelination, treatment with the compound increased the relative presence of IL-33-expressing OPCs and led to reduced paralysis;

*In an animal model of demyelination treated with the compound, dissection and electron microscopy showed dose-dependent increases in myelination.

Causes and treatments for twitching fingers

How music helps the heart find its beat