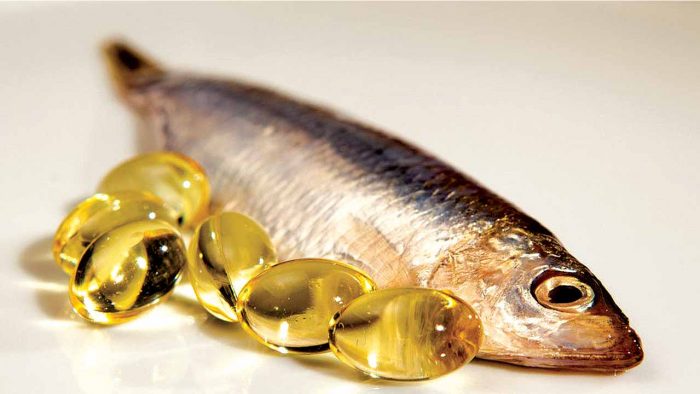 Fish Oil supplements could make men’s testicles bigger and boost their sperm count, a study claims.Men who took the pills, which contain omega-3 fatty acids, were found to have testicles 1.5ml larger and to ejaculate 0.64ml more sperm, on average.The men, who had an average age of 18, were included as regular supplement-takers if they had consumed fish oil for at least 60 out of the past 90 days. Larger testicles and more sperm creation are linked to higher testosterone levels and better fertility, although the study did not test how fertile the men were.

The research was published in the journal JAMA Network Open, by the American Medical Association. The experiment was described by scientists as ‘well-conducted’ and ‘insightful’ but it was clear that it did not prove fish oil makes men more fertile. Researchers from the University of Southern Denmark did their study using 1,679 young Danish men going through military fitness testing.

In Denmark military service is mandatory for all healthy men over the age of 18, so the men in the study were not yet soldiers. Each of the men was screened for Sexually Transmitted Infections (STIs), had physical exams, gave sperm samples and then answered questions about their diets and lifestyles. If someone was considered a regular fish oil supplement user, the research found, they produced millions more sperm in an average ejaculation.

The researchers wrote in their paper: “Fish oil supplements were associated … with higher semen volume and total sperm count, and larger testicular size.”Ninety-eight men in the study said they took fish oil supplements regularly, while another 95 took vitamin D or C supplements. Men in the fish oil group were less likely to have fertility problems, which were judged against the World Health Organization’s low sperm count limit of 39 million sperm per ml of semen.

The scientists found that 12.4 percent of the men who took fish oil supplements (12 out of 98) had sperm counts below the World Health Organisation’s (WHO’s) measure. This compared to 17.2 percent (192 out of 1,125) men who took no supplements. And the longer someone had been taking supplements for, the more sperm they were likely to produce.

The study did not give exact measurements for men’s testicle volume or sperm volumes – they only compared the two groups. And the scientists could not explain why – if it was true – the fish oil improved sperm quality.It was also not clear whether increased sperm volume was caused by – or caused – the change in testicle size. Scientists not involved with the research said the study had been well-conducted but it didn’t say how much fish oil the men took.

And nor did it reveal the men’s diets, which may have shown they were getting omega-3 from other sources such as fresh fish.Professor Sheena Lewis, reproductive medicine expert at Queen’s University, Belfast, said: “This is a large well-designed study and the association between fish oil intake and improved semen quality is compelling.

“However, the study focuses on healthy young men; mostly with sperm counts already in the fertile range.“There is no evidence from this study that infertile men with low sperm counts benefit from fish oil.”Dr. Frankie Phillips, of the British Dietetic Association, said missing information about the men’s diets did make the study’s results less convincing.She added: “Antioxidants, including vitamin C, selenium and vitamin A, as well as zinc and omega-3 fats all have a role in the production of healthy sperm.

“There is much focus on the diets of women who are trying to conceive, ensuring that they are in the best possible position to achieve a healthy pregnancy, but diet might also be a factor involved in men’s reproductive health.“Omega-3 is present in a both animal and plant derived foods, but oily fish stands out as an excellent source of long chain omega-3, and the UK population currently consume way below the recommended ‘at least one portion of oily fish per week”.

“So including omega-3 is already part of current dietary recommendations – this study on its own can’t prove that upping omega-3 will itself improve testicular function.”Also, according to researchers, women who have sex every week may have a lower chance of an early menopause. University College London experts asked nearly 3,000 women – who were tracked for 10 years – about how often they had sex. Women of any age who had sex each week were less likely to have been through the menopause, compared to those who did so less than once a month.

For example, those who had regular sex were 28 percent less likely to have entered the menopause at age 51, compared to their counterparts. Sexual activity included full-blown intercourse, oral sex, touching and caressing, or self-stimulation. Scientists said if a woman is not having sex and there is no chance of pregnancy, the body ‘chooses’ to stop investing energy into ovulation.

Instead, their bodies may decide to invest energy elsewhere, such as in looking after grandchildren. The theory, known as the grandmother hypothesis, says the menopause evolved to help mothers have more children. It suggests that grandmothers would aid their offspring to have more of their own children by caring for the existing grandchildren. A woman’s immune function is hampered during ovulation, making the body more susceptible to disease.

And so if a pregnancy is unlikely because of a lack of sexual activity, the body would divert its focus from a costly process to aiding existing relatives. The menopause is when a woman stops having periods and is no longer able to get pregnant naturally. The process is a natural part of ageing and usually occurs among women between 45 and 55. Researchers used data collected from 2,936 women who took part in the Study of Women’s Health Across the Nation (SWAN) in the United States (U.S.).

The women, an average age of 45 at the start of the study in 1996, were asked if and how often they had had sex in the past six months. They were also asked whether they had oral sex, sexual touching, or engaged in self-stimulation in the last six months. The researchers found that the most frequent pattern of sexual activity was weekly (64 percent). None of the women who took part had already entered the menopause, but 46 per cent were starting to experience symptoms (known as peri-menopause). Fifty-four per cent were pre-menopausal, meaning they had not yet displayed any symptoms and were still having their periods.

Interviews were carried out both when the women first took part and then ten years later. Women who had sex weekly were less likely to experience the menopause, compared to those who had sex lass than monthly. And women who had sex monthly were less likely to experience menopause at any given age, compared to those who had sex less than monthly. Prof. Ruth Mace, who co-authored the study, said: “The menopause is, of course, an inevitability for women, and there is no behavioural intervention that will prevent reproductive cessation.“Nonetheless, these results are an initial indication that menopause timing may be adaptive in response to the likelihood of becoming pregnant.”

How can a man’s diet affect his fertility?
The body must get all the chemicals it needs from the diet, meaning what you eat controls your health. Certain foods can improve – or worsen – a man’s fertility. The general rule is that a healthy, balanced diet is better for fertility than one too high in sugar or fat.

Fruits and vegetables are good
Fruit and veg are rich in nutrients such as vitamins C and A, polyphenols, magnesium, folate and fiber, which act as antioxidants in the body. Research has suggested a direct association between the production of reactive oxygen species in sperm cells and intake of antioxidants, which help to reduce this damage by neutralizing them.

Limit dairy foods
Intake of dairy foods in association with sperm production is somewhat controversial but the theory goes that as around 75 per cent of the milk we consume comes from pregnant cows, there may be a high level of naturally occurring oestrogens, which could affect sperm production.

Limit meat intake
Although not fully proven, it has been suggested that meat and processed meats may impact on fertility in men by way of xenobiotics (mainly xenestrogens) used in the farming process. Over-exposure to these compounds, which have estrogenic effects in the body, may play a role in the decline of sperm quality in men.

Avoid excessive amounts of sugar
Excessive intake of sugary foods may lead to overweight and obesity, driving insulin resistance, which may negatively influence sperm quality as a result of inflammation and oxidative stress. Diets high in sugar can also lead to blood sugar imbalances, which may disrupt the hypothalamic-pituitary-testicular axis impacting on sperm production.
*Culled from Daily Mail UK

How do you gain weight quickly and safely?