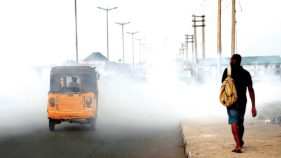 Researchers have found that living in polluted cities may cause the bones to be weaker and easier to break.

The Spanish researchers believe that bones are weakened because tiny pollutants seep into the blood when inhaled and speed up the ageing process.

Researchers found that smog-filled towns and cities have been linked to an increased risk of stroke, heart disease, lung cancer, acute respiratory diseases such as asthma and even dementia.

Although, there have only been a few studies into the effect of toxic airborne particles on bone health, the results have so far been inconclusive.

Researchers from the Barcelona Institute for Global Health in their latest paper, looked at 3,700 people who were all residents from 28 villages outside the city of Hyderabad in southern India between 2009 and 2012.

The researchers took measurements of PM2.5 and black carbon in the atmosphere in each village.

PM2.5 is the finest type of particulate matter, while black carbon is a larger toxin. Both come mainly from petrol and diesel vehicle exhausts.

The researchers also cross-referenced pollution levels with X-rays measuring bone mass in participants’ lower back, known as the lumbar spine, and hip.

The results showed that exposure to air pollution was associated with lower levels of bone mass.

The study lead author, Otavio Ranzani said: “This study contributes to the limited and inconclusive literature on air pollution and bone health.

“Inhalation of polluting particles could lead to bone mass loss through the oxidative stress and inflammation caused by air pollution.’ The findings were published in the journal Jama Network Open.

However, a 2017 study by Columbia University of more than nine million people was the first to find a link between traffic fumes and fractures caused by osteoporosis.

Osteoporosis is a health condition that weakens bones, making them fragile and more likely to break.

The study found hospital admissions for bone fractures were higher in communities with elevated levels of PM2.5, as more than 80 per cent of the world’s urban population is breathing unsafe levels of air pollution.

Described as an invisible killer, it causes an estimated seven million premature deaths yearly worldwide, according to the World Health Organisation (WHO).

However, health experts fear that pollution is also fuelling increases in degenerative diseases such as Alzheimer’s and other forms of dementia.

Many pollutants are thought to directly affect brain chemistry in a variety of ways.

For instance, particulate matter from traffic and industry can carry toxins through small passageways and directly enter the brain.

How to treat and prevent leg muscle cramps